As an El Niño weather pattern pushes into the U.S. this winter, potentially bringing warmer than normal temperatures and lighter than normal snowfall, there’s little worry in Cori-Ann Cearly’s voice as she evaluates the upcoming Upper Peninsula snowmobile season.

“There’s never really a problem or a question if we’ll have enough snow,” Cearly, the president of the Munising Visitors Bureau, says with a laugh.

She’s gained that confidence based on an average snowfall of 230 inches in Alger County, making it nearly a guarantee that the Lake Superior-side town of Munising and its surrounding 330 miles of groomed trails will be as flush with snow as ever.

The “preseason” also indicates the trail system will be ready to go. As Cearly talked in mid-November, there were already more than 8 inches on the ground and volunteers were putting the finishing touches to be ready to send snowmobilers off for adventures to Pictured Rocks National Lakeshore and beyond.

Known as the Snowmobile Capital of the Midwest, Alger County is the place to be for sled riders looking for a complete trail system that allows travel between towns, through woods and to incredible ice caves and ice structures.

Cearly said offseason improvements have prepped the region for another outstanding year.

Here are three new developments that will make snowmobiling Munising better than ever:

Members of the Snowmobile & O.R.V. Association of Alger County (SORVA for short) have taken over an additional 30 miles of trail that they will groom every day beginning on Dec. 1, the official start of the snowmobiling season. The added miles are on either end of the 300 miles that have been regularly maintained. It will provide access Au Train to Shingleton and all trails and points between, Cearly said. A group that had maintained the trails handed the mileage over because it was too hard and too far from their home base. SORVA goes out every night to perfect the trail so there will be less rattling and rolling for your ride.

The trails that already allowed riders to glide across the snow like a highway in the woods will now include a median of sorts. SORVA brought in brush-hogging equipment over the warmer months to provide more room to ride — a key safety factor when sled operators encounter each other while traveling in opposite directions. Cearly estimates that the paths have 30 percent more room. While the width could allow three riders to fan out side-by-side, it is still strongly recommended to travel the trails single-file.

Low-lying areas have been in-filled

More off-season trail preparation has brought even better grading and filling to eliminate large depressions and holes. Don’t worry, there are still great hills and varying terrain, but riders won’t hit pothole-like conditions while zipping around the trail. Previously snowfalls would not completely fill and level the terrain since the snow packs down and forms around the hole, just like a pothole that will jar you while driving on pavement.

“All of this has been done to make it a better experience,” Cearly said. “You’re going to have just as much fun, probably more, because it’s going to be such a smooth ride.”

Learn more about all Munising has to offer here.

There’s a reason the British built Fort Holmes where they did. Two hundred years ago, it just wasn’t easy for American forces to get up there, some 320 feet above lake level on the highest point of Mackinac Island. 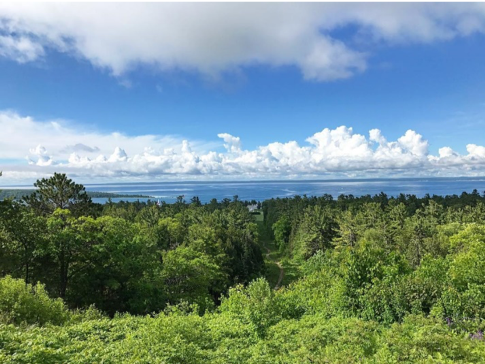 The peak summer tourism season has ended, but Mackinac Island is still open for adventure this fall. And it’s as beautiful as ever.

The reward for making it up to the top is not only a look around the recently-restored fort, but a spectacular, panoramic view of the island and the surrounding waters. It’s especially beautiful in the fall, when the blue of the Mackinac Straits contrasts with the reds, oranges and yellows of the leaves on the trees below Fort Holmes and nearby Point Lookout.

“Seeing the changing colors adds a different perspective to the island,” Fisher said. “One of my favorite spots in the fall to go is Point Lookout. You get a good northern view of the trees.”

The summer tourism season has faded into fall, but Mackinac Island is still open for adventure. Here are some of the best ways to experience the splendor of Mackinac in September and October:

Hike the trails — More than 80 percent of the island is a state park, and there are 70-some miles of trails running through it — including over 30 miles of single-track trails only wide enough for single-file hiking or biking. 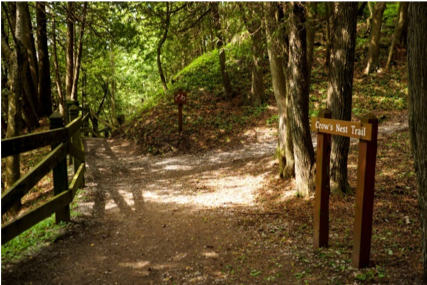 A state park makes up more than 80 percent of Mackinac Island, which has 70-some miles of trails running through it.

Tranquil Bluff Trail is one of the more challenging trails on the island, and it offers incredible clifftop views of the lake below. “It’s very rooty and rocky with lots of ups and downs and they’re pretty steep,” Fisher said. “Part of it’s not even bikeable, but you can walk it.”

Other scenic trails: Lime Kiln and Winnebago trails on the east side of the island near Arch Rock; Allouez, Coffee, Indian Pipe and Trillium trails on the west side near the village; British Landing Nature Trail on the north side. Find maps here.

Explore the sites — Everybody goes to the iconic Arch Rock. Not everybody sees the other unique geologic sites farther into the island’s interior. If you can make it up to Point Lookout, you not only get a great view of the trees to the north but also a look at Sugar Loaf, a giant rock that rises 80 feet out of the middle of Mackinac.

The contrast between the island’s largest limestone stack, the fall colors around it and the beautiful blue waters beyond makes for a striking vista. Adventurous types can even take a staircase down to Sugar Loaf to get up close, where you’ll feel dwarfed by the sheer size of the tower.

Other sites to explore: Sunset Rock in the Stonecliffe Area is a popular engagement spot with a great view of the Mackinac Bridge; Crack-in-the-Island near the airport is a literal crack in the island; Skull Cave near Fort Holmes once housed piles of bones.

Pedal around — Because cars are not allowed on Mackinac, there are tons of bikes. You can take your own to the island on the ferry or rent from one of several shops. Most everybody who bikes takes a ride around the island on M-185, the country’s only state highway without cars. It’s 8.2 miles around the loop, which takes about an hour or so without stops. 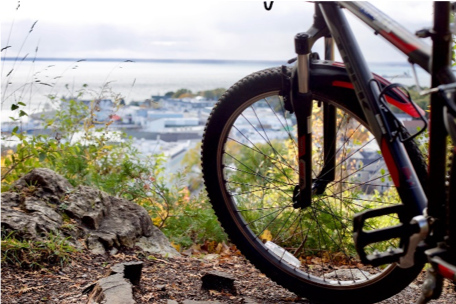 You can take your own bike to Mackinac on the ferry or rent from one of several shops on the island.

There also are many miles of paved or gravel roads running the interior of the island, as well as single-track dirt trails. A fat tire bike is recommended to handle the roots and rocks of the dirt paths.

Other ways to get around: take a horse-drawn carriage ride through town or a saddle ride through the island’s interior; go for a sunrise kayak paddle and see fall colors from the water; get behind the wheel of a golf cart at the historic Wawashkamo Golf Club or The Jewel at the Grand Hotel.

After a day of play outdoors, relax the night away at one of Mackinac’s great restaurants and taste some world-famous Mackinac Island fudge, or join the party during the island’s inaugural Macktoberfest or popular Halloween weekend. Check out the island’s calendar of fall events.

A week-long class at Central Michigan University brought Mary Zucchero to Mt. Pleasant, but it was her discovery of Deerfield Nature Park that keeps bringing her back even when she’s not on business.

Zucchero, the executive director of the Livingston County Convention & Visitors Bureau, was impressed by the wildlife, the soothing sounds of the Chippewa River and the ability to stretch her legs on eight miles of hiking trails after being in a classroom all day.

“(It’s) a hidden gem and it’s one of the best parks in the state,” said Zucchero, an avid hiker who enjoys time on her local metroparks system in addition to state and national trails. “I needed a break from all the studying and classes and found this park. I went every day and sometimes twice a day.

“It’s rare to find a park in Michigan with a covered bridge, two suspension footbridges and amazing trails that overlook the river.” 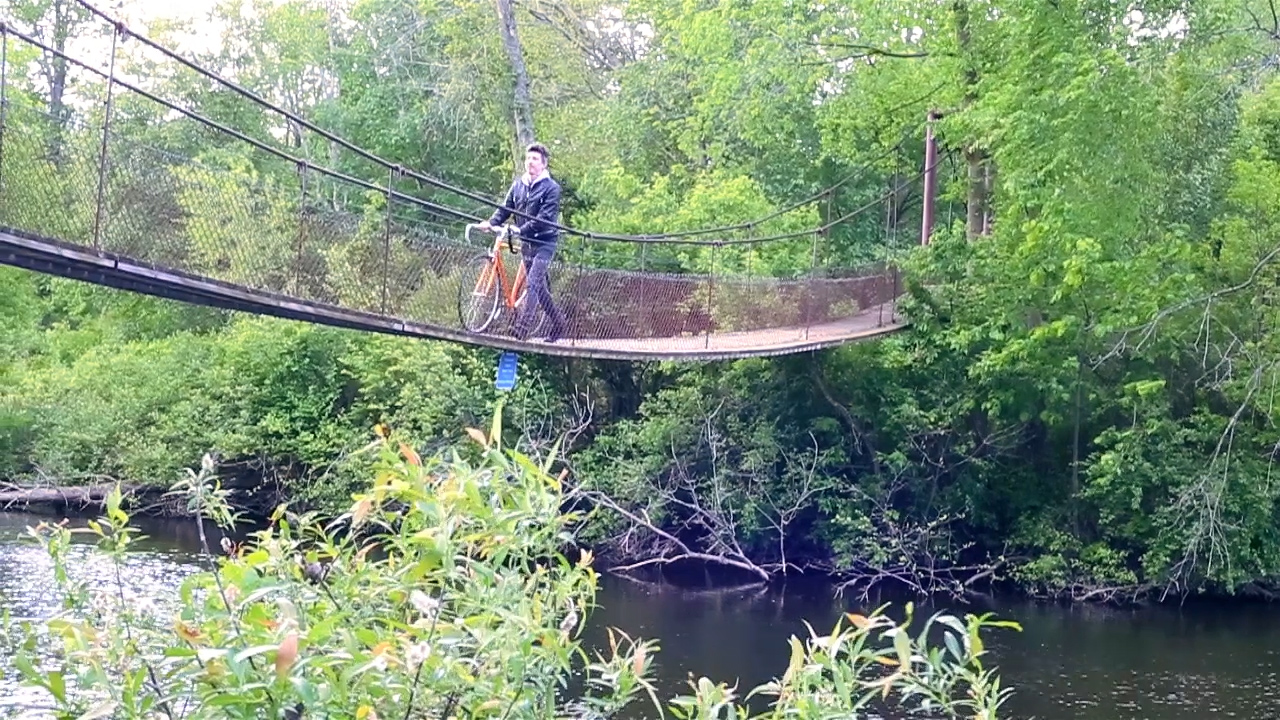 Zucchero sat by the river and read, watched as kayakers floated by on the Chippewa River and observed birdwatchers in the serene setting. It’s an environment that relieves stress and serves as a year-round attraction for those looking to unwind. The 591-acre park also features: 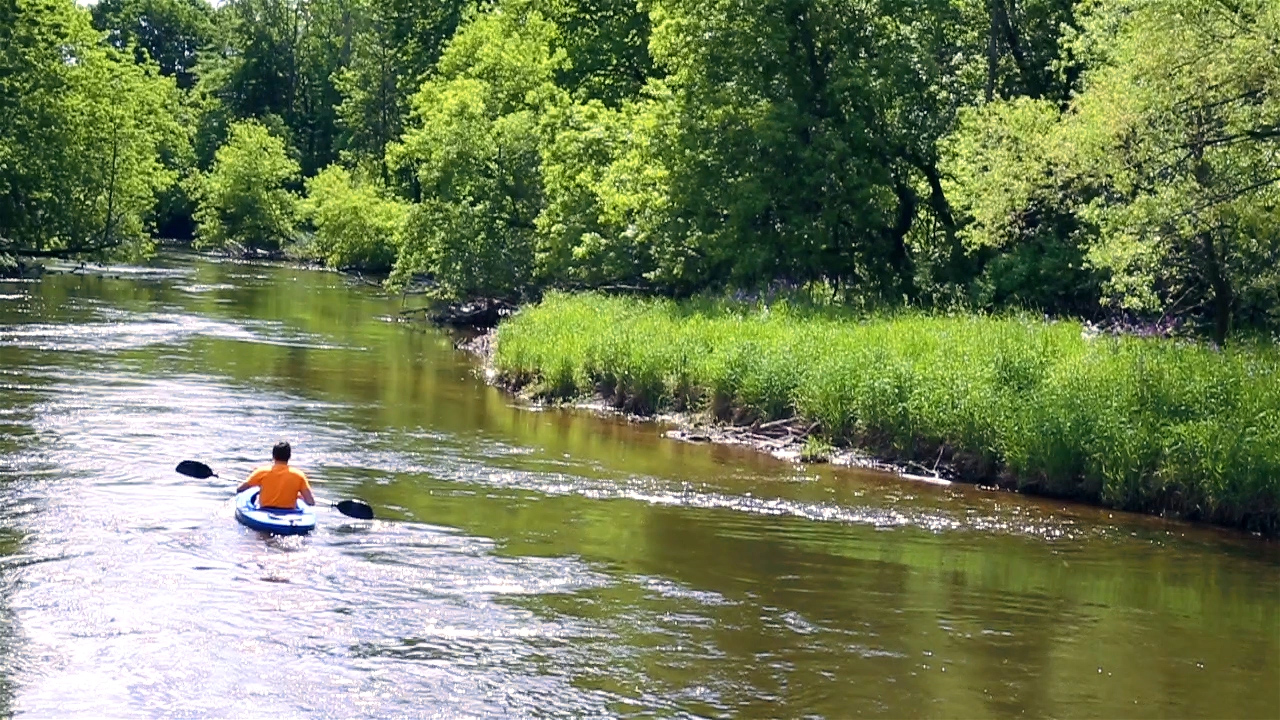 In addition to Deerfield Park, the Mt. Pleasant area claims many other activities to free your mind. Here are tips to get the most out of your visit:

Mt. Pleasant is surrounded with outdoor beauty and activities that will get your blood moving after a day in a meeting or classroom. 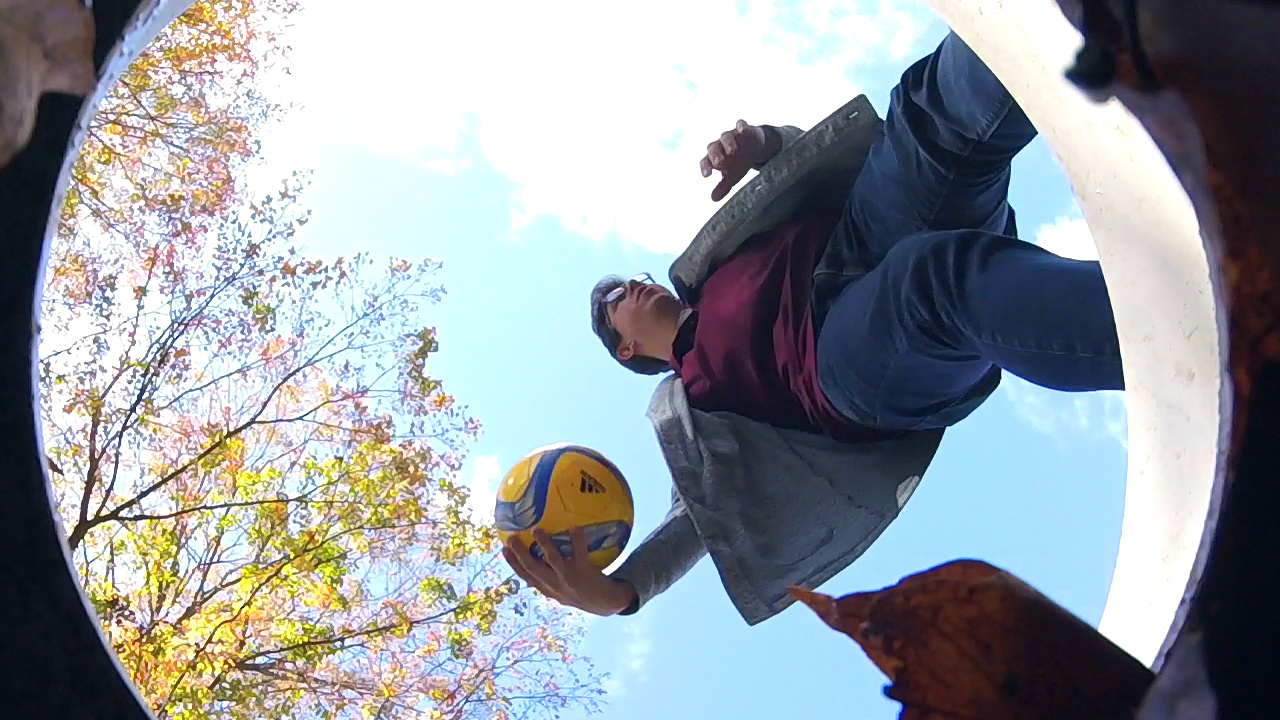 There’s no shortage of activities and events to keep you busy while around town. 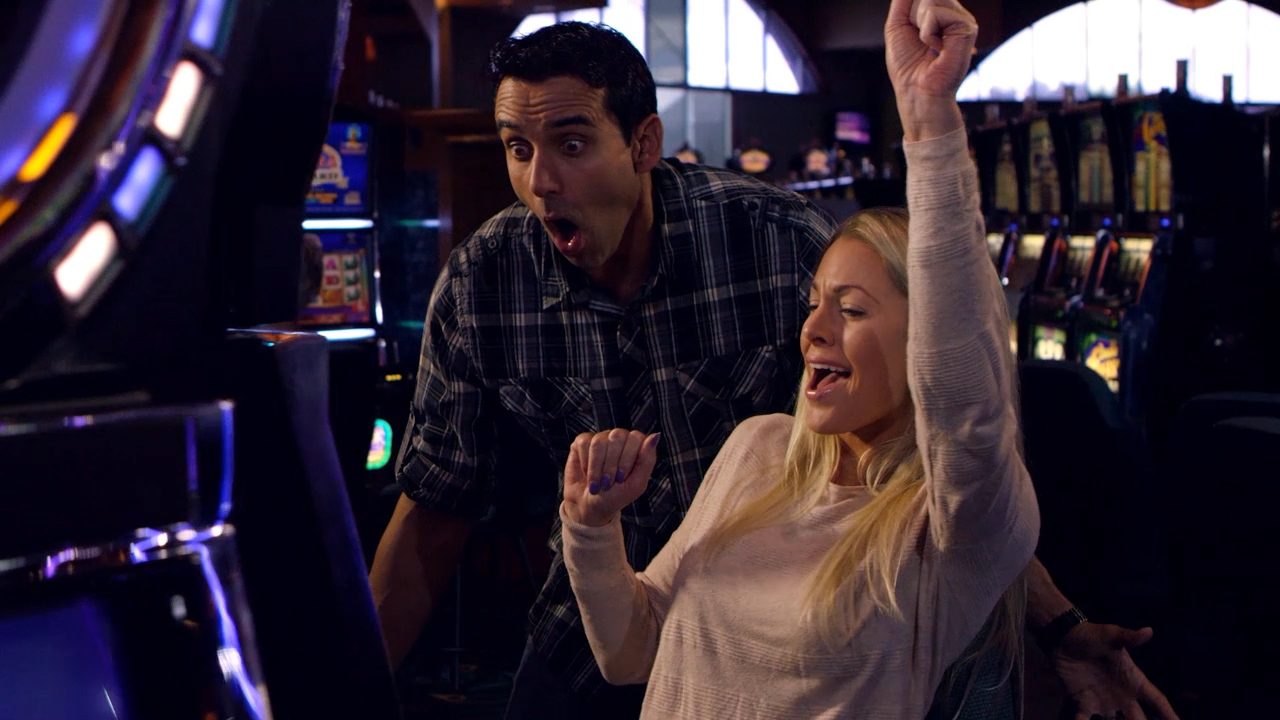 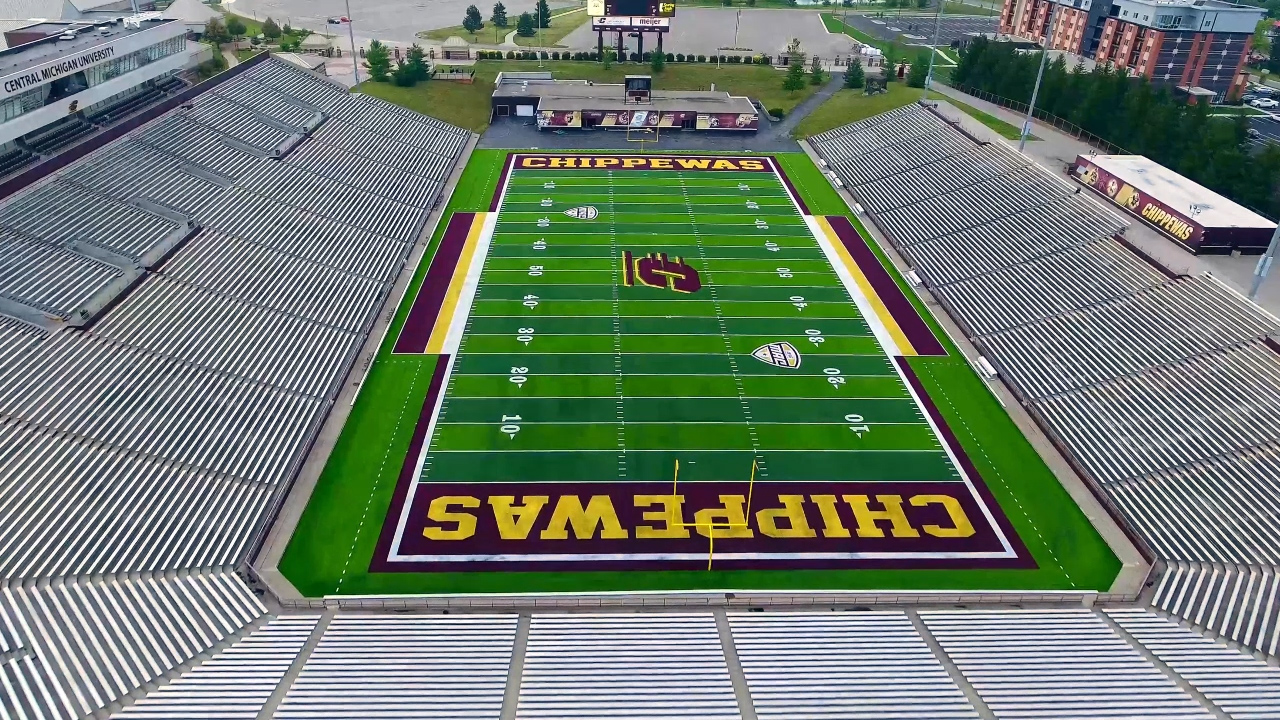 Dinner and a drink on the town: 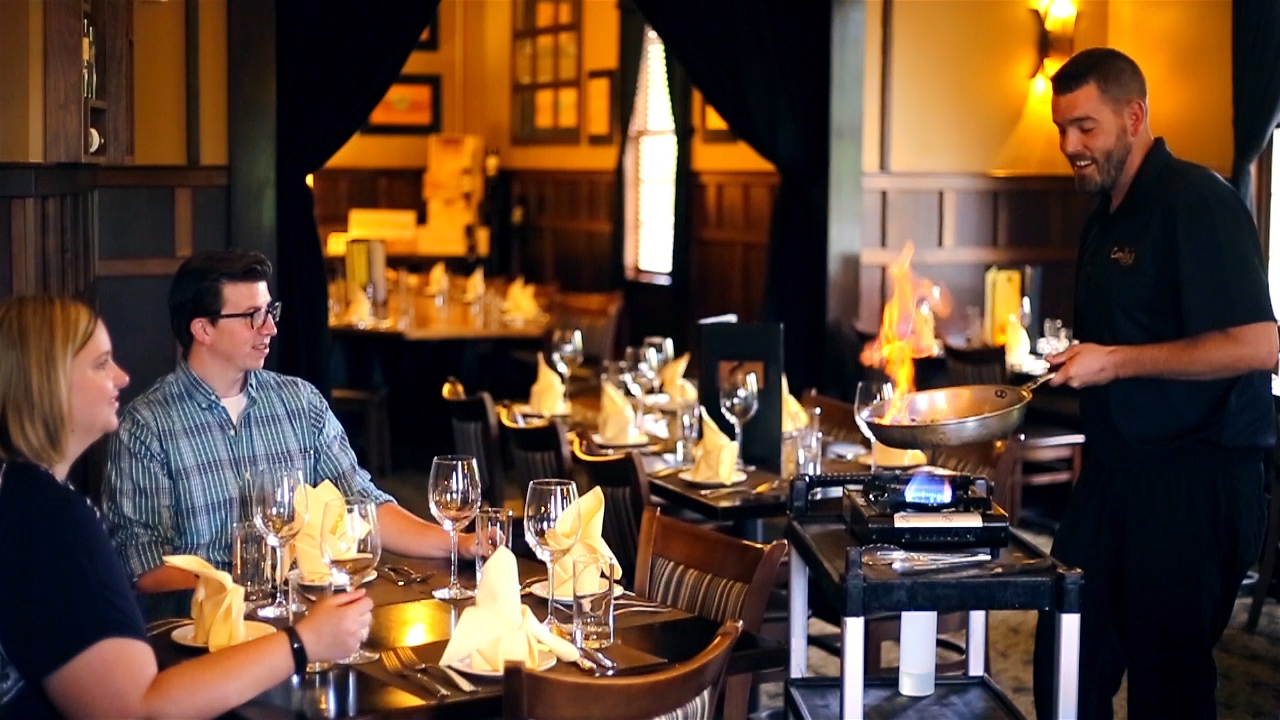 If you’re looking for a more relaxing wind down, you’ll find it here. 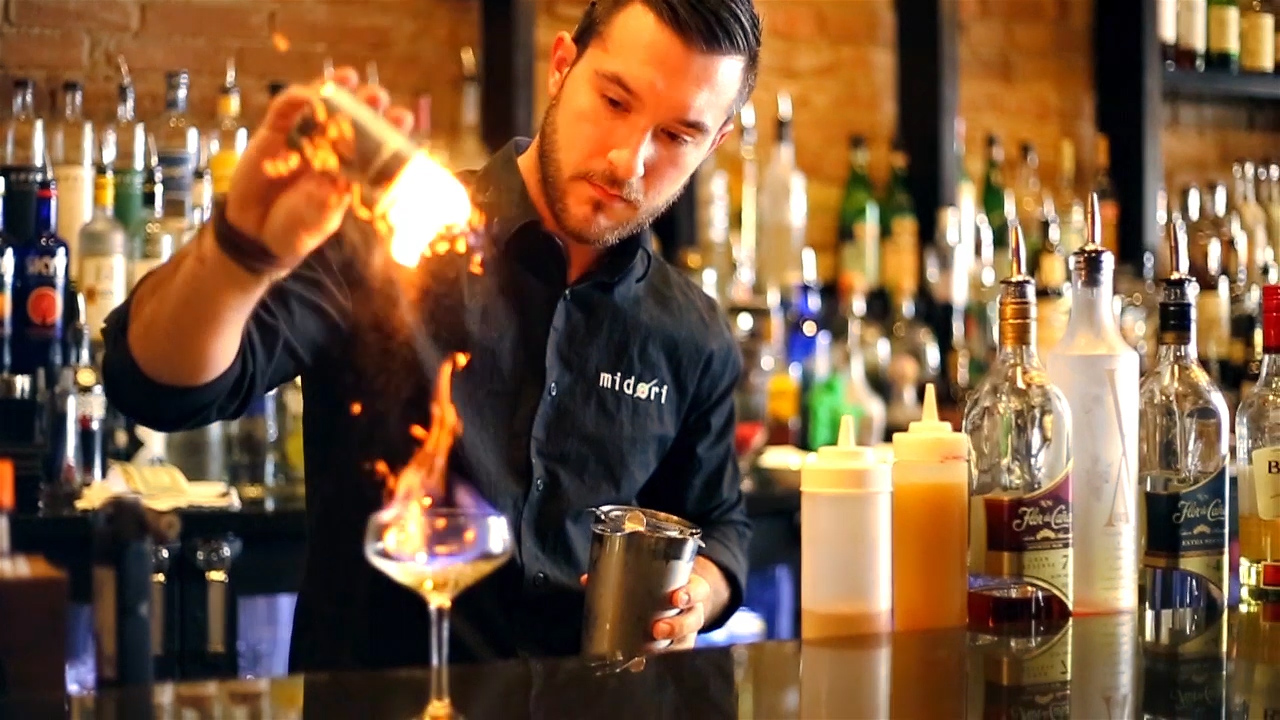 Find an event or activity to entertain you on your trip to Mt. Pleasant.

Use of and/or registration on any portion of this site constitutes acceptance of our User Agreement (updated 1/1/2020) and Privacy Policy and Cookie Statement (updated 1/1/2020).
© Advance Local Media LLC. All rights reserved (About Us).
The material on this site may not be reproduced, distributed, transmitted, cached or otherwise used, except with the prior written permission of Advance Local.
Your California Privacy Rights.
MI Best Sweepstakes – Click here for a chance to win!